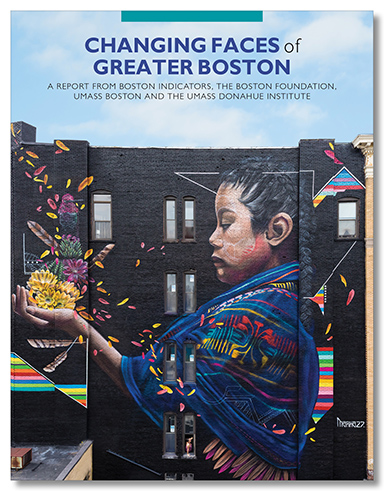 That may be a surprising theme to emerge from a rich and multilayered conversation about changing demographics in Greater Boston. It’s easy to think that population change just happens to a region. As became clear in two panel discussions on May 8 at the Boston Foundation, however, such change is the product of intent, and with intention we can counter the disparities and challenges that come with it.

Authors of each chapter of the just-released report, Changing Faces of Greater Boston, made mini presentations on their findings. The report is unique in bringing together Boston Indicators, the Boston Foundation, the Donahue Institute at UMass Boston and four distinct ethnic institutes—all housed at UMass Boston—representing deep study in African American, Asian American, Latino and Native American people and issues. The report includes an overview of the Greater Boston region; chapters on each population subgroup, including case studies of towns or neighborhoods with noteworthy recent changes for each; plus a look at two locations where overall diversity has flourished.

Each group and location has its particular phenomena and challenges, but given that the population in every one of Greater Boston’s 147 cities and towns in five counties saw an increase in its share of people of color since 1990, and that nearly all of the region’s growth in that time span has come from immigration, there are several key commonalities. One is that along with growing numbers comes growing intragroup diversity, and a great deal of crossover. The high-tech Ph.D. from India and the Cambodian day laborer both fall into the Asian American group, for example. Non–Spanish speaking indigenous people from Guatemala’s highlands are geographically Latino, but may have more in common with our region’s Native American people.

Other commonalities include the fact that housing costs and availability drive residential patterns; that socioeconomic and educational segregation remains, despite strides; and that diversity in political, business and civic representation lags diversity in the population.

And that brings us back to intentionality. As Institute for New England Native American Studies Director J. Cedric Woods pointed out, policy is behind today’s demographic status for everyone. In the case of Native Americans, that includes a 1675 law that intentionally prevented indigenous people from living in Boston—and remained on the books until 2004. Combined with other policy decisions, such as not allowing multiple answers to the race/ethnicity question in the census, this has led intentionally to undercounting Native Americans and others of mixed heritage.

Intentionality has led to segregation and disempowerment of people in the minority. As an example, said Paul Watanabe, Director of the Institute for Asian American Studies at UMass Boston, look at the Census. “Two big changes to the 2020 Census were tested and likely to happen until the [presidential] administration changed.” These were removing the binary Latino/Non-Latino choice as separate from racial identity, and adding a new Middle Eastern/North African choice. “They dropped those and added the citizenship question. That was political, pure and simple. It will depress the count from populations of color and I think that’s its intent.”

Segregation and disempowerment must be countered with intentionality, said Cambridge Mayor Marc McGovern during the second panel discussion on the report. In office less than two years, he has pushed his constituents to “be intentional about what we say we are in the ‘People’s Republic of Cambridge.’ It’s easy to be a good progressive until someone wants to put affordable housing on your street.” Cambridge has been a racially diverse city for some time, but in terms of political representation, who attends the meetings to make decisions? People privileged with time, money, information and the confidence that their opinion matters—often older, wealthy, white homeowners. This dynamic played out in nearly all of the increasingly diverse neighborhoods examined in the report. “The socioeconomic divide has grown,” said McGovern. “How can we be intentional about addressing issues of equity?”

Gastón Institute Director Lorna Rivera’s remark about the importance of this joint research project actually spoke to that question as well: “Often our communities are pitted against each other; having solidarity across our communities is more important than ever. This is such a dangerous political climate. In Boston we tend to think just in terms of black and white, so the invisibility of other groups—like Latinos, who can be both black and white—[…calls us to] go deeper to look across power and privilege and oppression that we all face. We need to work more closely together than ever before.”

Watanabe could have been speaking of any of these demographic groups when he described the stunningly diverse set of immigrants and citizens making up the Asian American community, “striving to be equals in a nation whose greatness has yet to be attained.”