Boston – The population of Greater Boston is shifting in unprecedented ways, with impacts on communities across the region, according to a new reports series co-authored and published today by Boston Indicators, the research center at the Boston Foundation, the UMass Donahue Institute and the four free-standing social research institutes at the University of Massachusetts Boston dedicated to the major communities of color.

The report highlights the seismic demographic shifts across the region, and through a series of case studies, probes more deeply into the makeup of the region’s Asian, Black, Latinx and Native American communities.

The report features an overview of the changes in Greater Boston demographics since 1990 by Luc Schuster of Boston Indicators and Gail Waterhouse and Mark Melnik of UMass Donahue Institute, followed by sections that explore issues of immigration, migration and diversity on each community of color. Each section also includes case studies of a city or town, and a Boston neighborhood that has been dramatically impacted by demographic change.

A final section, Newly Diverse Communities in Greater Boston, by Trevor Mattos of Boston Indicators, explores the impact of major demographic change in some of the region’s most rapidly diversifying communities, using Malden and Hyde Park as case studies.

“We are very proud of this research, both for the new light it sheds on the central role that immigrants and people of color have played in helping grow and strengthen our region, and also because of the unique partnership that has made the research possible,” said Luc Schuster, Director of Boston Indicators.

“Immigration and diversity are often seen as urban issues, but the data here make it clear just how much growth there has been in non-white populations throughout Greater Boston over the past three decades.” said Mark Melnik of UMass Donahue. “By understanding the demographic change, we can better leverage the opportunities inherent in our growing diversity and better understand how to address the persistent opportunity gaps that leave entire segments of our population behind.”

A transformation – with an economic impact 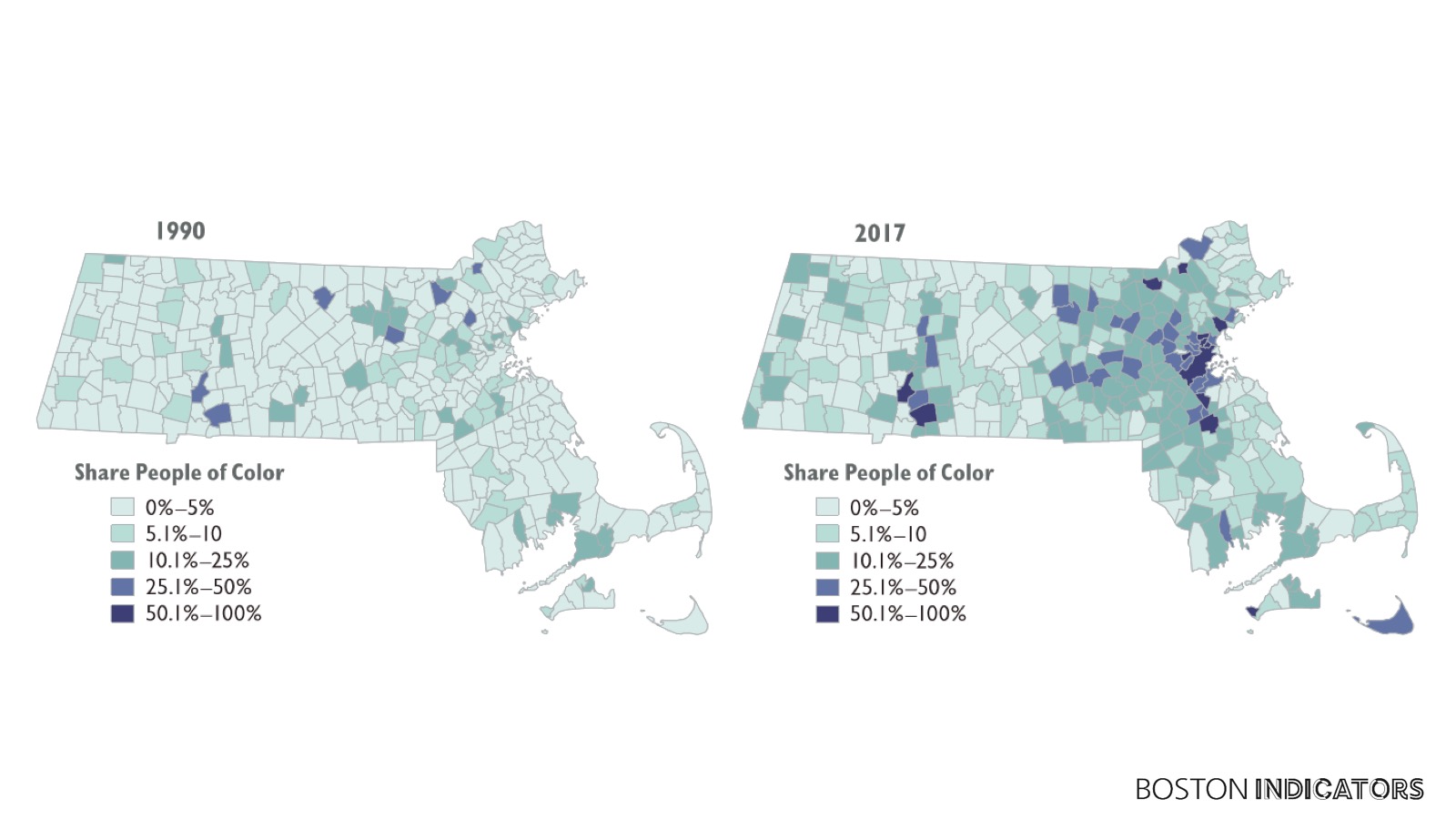 The report finds that the percentage of nonwhite residents has increased in all 147 cities and towns in Greater Boston since 1990 (See attached Figure 1.2) – during that time, the non-white population outside of Boston increased by 254%, compared with a 63% increase in the city. In fact, a number of communities that were 80% or more white in 1990 are “minority-majority” today. Boston still scores highest on the “diversity index,” but communities like Lynn, Everett, Malden, Randolph and others have nearly matched the demographic mix. Remarkably, an analysis of economic data suggests for some of those newly diverse areas finds they have generally lower levels of income disparity than the region overall, driven by higher median incomes for non-white residents.

That impact has not carried over to the boardroom or local government, however. Despite the rapid growth in non-white residents to 32 percent of the region’s workforce, non-white people hold just 14 percent of CEOs or legislative roles. Also, while 40 percent of public school students statewide are students of color, just 8 percent of teachers are people of color.

A changing pattern of immigration

The percentage of foreign-born residents in Greater Boston in 2017 is the highest it has been since before the Great Depression (although still lagging behind the levels reached from 1850 to 1930), and those immigrants comprise more than 90 percent of Greater Boston’s population growth since 1990.

The report finds these new immigrants, however, are coming from far different places than their predecessors. Whereas in 1990, the top countries of origin for foreign-born Greater Boston residents were Canada, Italy and Portugal, today none of those countries are even in the Top 10. In 2017, China, the Dominican Republic and Brazil top the list – and no European country is in the Top 10. 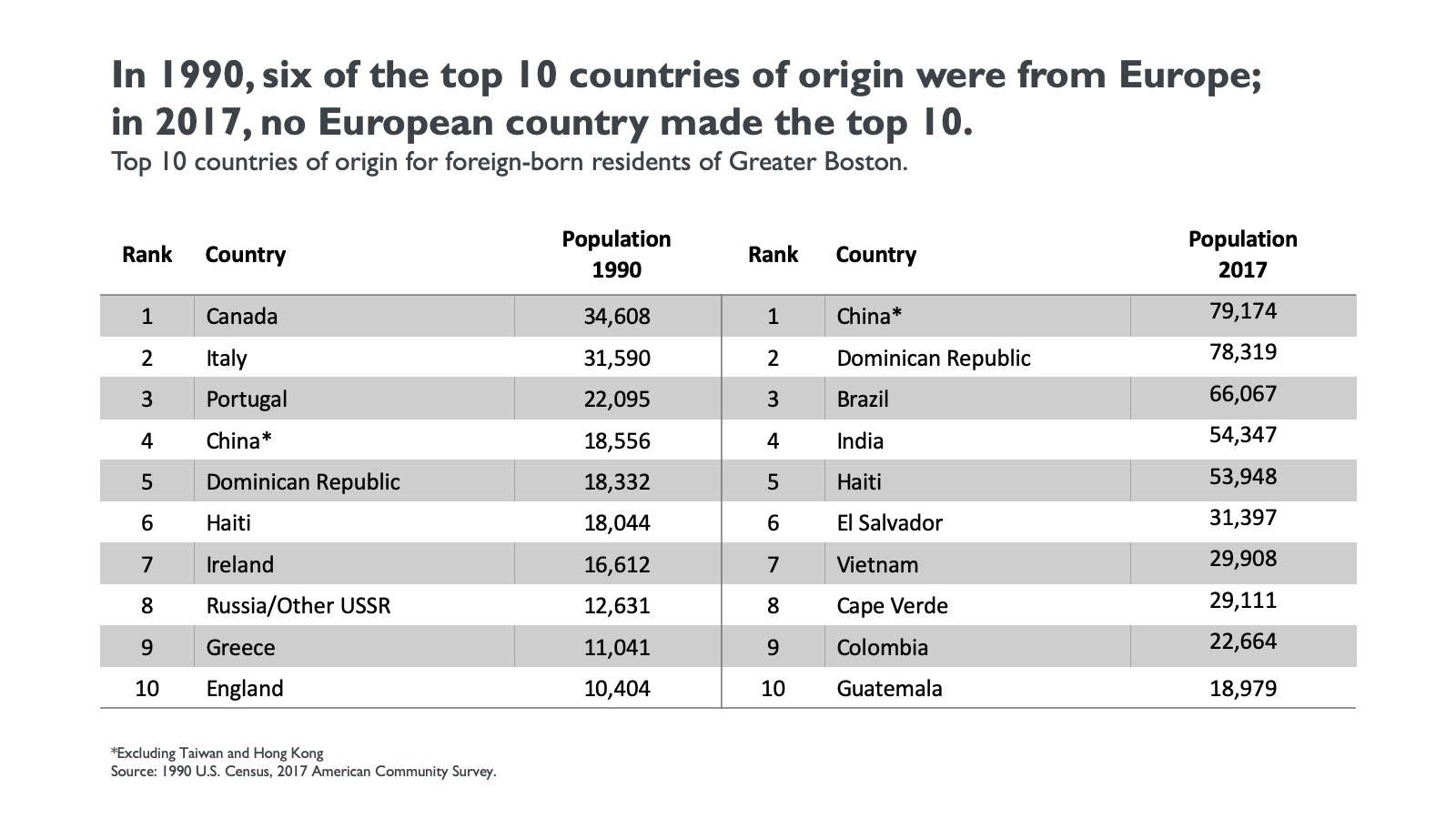 However, today’s immigrants defy stereotypes. While 1-in-5 foreign-born adults have less than a high school diploma, nearly 40 percent have at least a college degree, and the majority have at least some college or an Associates Degree. Even within racial and ethnic groups, there is tremendous diversity. For example, Indian residents of Boston have twice the median income and four times the rate of bachelor’s degree holders as Cambodians in the area, although both are counted as Asian in surveys.

Each section of the report strives to look both at high level data that illustrate the strengths, needs, opportunities and challenges facing Greater Boston populations, and to peer beneath the high-level numbers to highlight the diverse identities often lumped into broad categories.

“Greater Boston’s vibrancy and dynamism are some of our greatest assets, and they are driven by the wealth of diversity among the people who call the region home,” said Paul S. Grogan, President and CEO of the Boston Foundation. “This report illustrates the critical value of immigration to our region, and by diving deeper into the data, it broadens our understanding of the ways our changing population is reshaping communities, and how communities can change to better serve our residents.”

The new report, Changing Faces of Greater Boston, can be downloaded from bostonindicators.org. An online version of the report also features interactive data features and demographic data for all 147 cities and towns in the Greater Boston region.