Door of Clubs | City of Ideas

Pranam Lipinski was born and raised in the Berkshires of Western Massachusetts in the town of Adams.  While attending Endicott College as a business major, he co-founded the college’s Investment Club.  It was through founding that club that Pranam developed his desire to support and harness the initiative of students who participate in clubs at schools.  Today, he is Co-Founder of the new Pledge 1% Boston company Door of Clubs.

A few years ago, he toured Massachusetts and met with about 50 different student clubs to research ways he could support them and connect them with opportunities.

“The one thing students in clubs have in common is that they take the initiative to grow outside the classroom,” says Pranam. “Student clubs are the number one way to develop soft skills. You would think that potential employers would benefit from gaining access to those kinds of students.”   He says that many clubs are underfunded and companies have a difficult time recruiting from them directly. The Door of Clubs model aims to address this gap and is built on the belief that initiative should be both supported and rewarded.  “The support is the funding and the reward is the opportunity,” says Pranam. 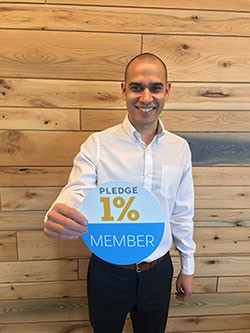 As an entrepreneur, Pranam has been fortunate enough to have mentors and champions.  The Executive Vice President of Human Resources at iRobot, Russ Campanello, is one of his closest mentors today. The CEO of Mastercard, Ajay Banga, has also been a gracious mentor, as well as fellow Endicott alumna, Libby Moore, who was Oprah Winfey’s Chief of Staff for several years.

Now Pranam wants to make sure that Door of Clubs is giving back early on.  “I think what’s great about Pledge 1% is that we believe you can be a company of purpose and contribution from day one. This is about setting an intention and doing the right thing even before you’re successful. We’re doing this to have a successful company and a consciousness about where we ultimately want to go as a company. Pledge 1% embodies this intent of goodness that is so easy to overlook when you’re going at a breakneck pace as a startup. But it’s important to take a second and set the right intention from the start. There’s a true honor in that. I believe it’s also character building for companies.”

Door of Clubs has pledged $500,000 and is looking for companies and individuals who want to be strategic partners and help raise the remaining $500,000. Reach out to  Pranam to learn more about this initiative.

• He has committed to a year of ice cold showers. “I’m now in month 10,” he says. “It’s a good daily awakening and a mental discipline—and it wakes up the senses.”
• Pranam’s name means “I salute the truth within you.”
• He loves trout fishing in the brooks and rivers in Western Massachusetts.
• He is from Adams, which has the tallest mountain in Massachusetts, and his mother is from Nepal, which has the tallest mountain in the world.