A student becomes a coach | City of Ideas 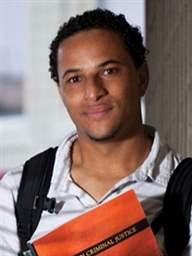 In our third "Voices of Success" post this month, we highlight the story of Elisio Depina, who began his involvement with Success Boston as a student, returned as a coach, and found both experiences had a profound impact.

My name is Elisio Depina. I emigrated from Cape Verde to the United States fourteen years ago, as a teenager who did not know a word of English. Soon after arriving, I enrolled at the Jeremiah E. Burke High School, but then life took a turn; I had to drop out of high school and became homeless. After overcoming many difficulties - for example, not having enough money to pay for college - I ultimately returned to school and with help from my Success Boston Coach at the Boston Private Industry Council (PIC), I was able to earn my associate degree in criminal justice from Bunker Hill Community College. I then transferred to University of New Haven, where I completed my bachelor’s in criminal justice and master’s in public administration.

I am part of the first graduating class of the Success Boston initiative.

And then you came back to Success Boston?

Because Success Boston and the PIC changed my life, I returned to Boston where I was able to attain a position working with students. I had always known that I wanted to work for the Boston PIC, so when the opportunity arose, I applied and attained a position as a Postsecondary Coach to make a difference in students’ lives, just as my success coach made in mine.

Today, I have the opportunity to live my dream while inspiring students to live to their full potential, despite the struggles we face on a daily basis. I also have given several motivational/inspirational presentations to middle schools, high schools, and college students. When I am not working, I enjoy writing and going to the movies. Writing and movies help me clear my head so when I return to work each morning I always have a fresh mind. During my free time, I spend time with friends and family.

And how is the job going?

Working with my students has changed my life. I have noticed that as time progresses, I feel better equipped with resources to assist my students in bettering themselves.

For example, I was able to successfully help one particular student, who was having a hard time paying for his classes, submit all his paperwork on time so he could start taking classes during the fall 2017 semester. I feel much more confident in my ability to motivate and lead my students so that they can make better decisions about their lives.

Together, the Boston Foundation, the Boston Public Schools (BPS), the City of Boston, Boston Private Industry Council, and 37 area institutions of higher education led by UMass Boston and Bunker Hill Community College join with local nonprofit partners in an effort to double the number of BPS graduates completing college. Learn more about Success Boston at successboston.org